One thing that BSW students Ash Moyano-Villa and Tyson Sommer have in common is that they are committed to social justice.  Another?  They both love books.  Friends in and out of the classroom, one day they were talking about ways they could do more in the College and Ash had an idea—what if the CSW had a Little Free Library?  Not just any library, a library that highlighted diverse voices. 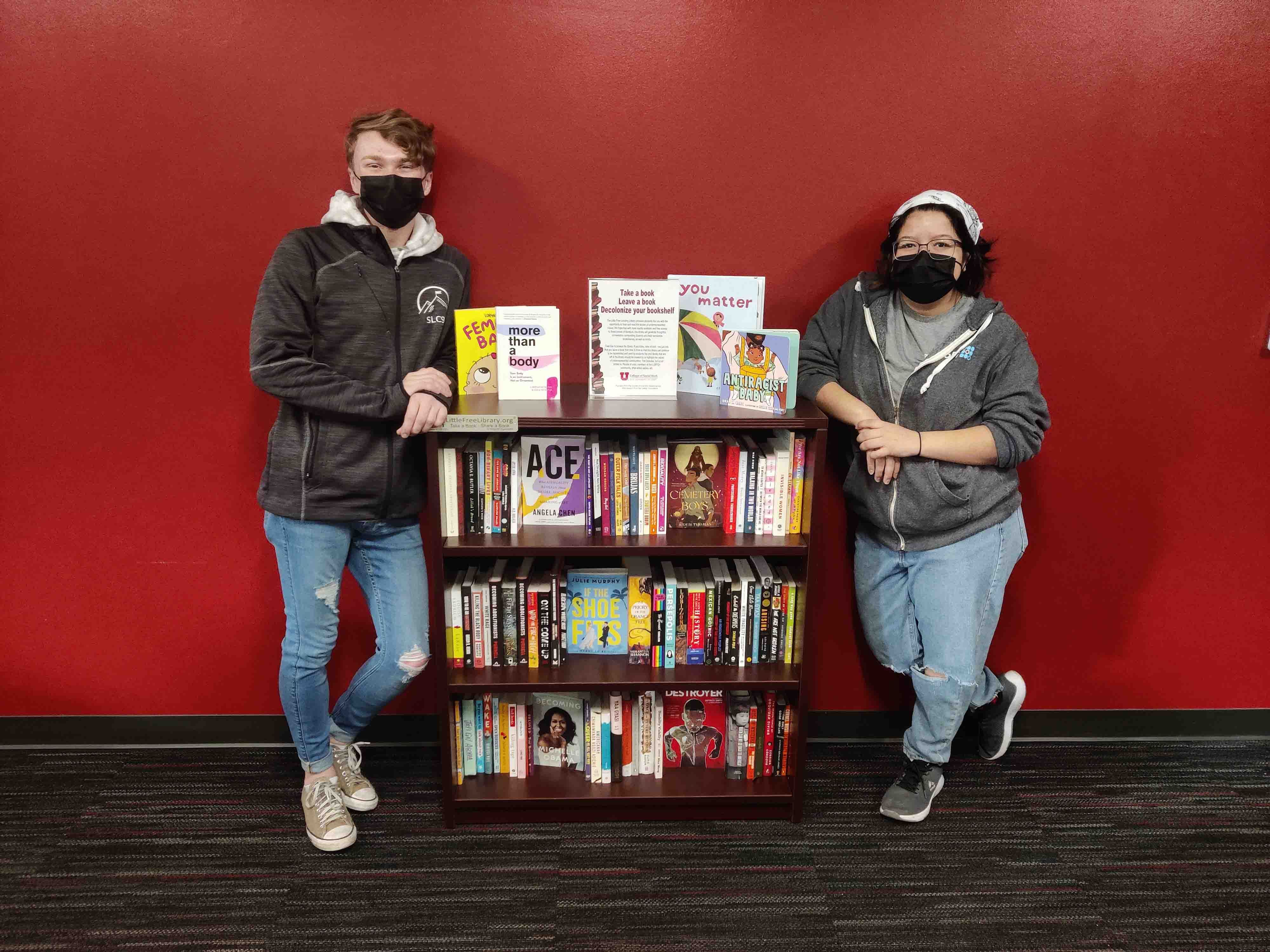 “For as long as I can remember, reading has been a source of joy for me,” said Ash.  “But as I grew older and became more aware of my position in the world as a person of color, I realized a lot of the books I was reading didn't represent me at all.  This project was inspired by that realization.  I wanted to create a space where anyone could pick up a book and find some aspect of themselves represented or learn something new about someone else.”

Tyson explained that they were also inspired by the social work code of ethics.  “As a student in the College of Social Work, I really liked the idea of choosing books from marginalized authors because it fits with the mission of social workers—it helps highlight those who have been historically silenced.”

Aware that colleges sometimes have funding available for student led projects, they submitted a project proposal to College of Social Work administration: a library of books from diverse authors, originally seeded with books purchased from local bookstores.  This last part was also of great importance.  They wanted to be intentional about supporting the local community with the project.  “We didn’t want to add more funding to the pockets of big corporations, but rather, to the pockets of smaller bookstores, which are cornerstones of every society,” explained Ash.

Once the project was approved, with funding support from the Castle Foundation, the fun part began: book shopping!  And the enthusiasm was contagious.  “One thing that stood out to me was how excited everyone was about our little project,” said Ash.  “In the King’s English Bookshop, nearly every staff member on duty that day immediately ran to get their favorite book for us that highlighted diversity.”

“Not only were we finding books for the library, but I also found myself finding many books by diverse authors that I wanted to read,” said Tyson.  “It was a super powerful experience because shopping specifically for books by diverse authors really opened my eyes to how much more there is to read out there from all different walks of life.”  He continued, “it also opened my eyes to how many of the books we read in school are not as representative as we think.  Many of the books that individuals read, whether it be a textbook in college or an assigned reading in high school, come from the voices of white, cisgender, straight individuals.  This library is a way to help individuals break out of that pattern and explore the writings and experiences of marginalized populations and authors.”

In total, the seed funding purchased nearly 100 new books from three local bookstores:  The King’s English (mentioned above), Under the Umbrella (“It was especially nice to support this queer owned and operated store that provides a safe space and plenty of resources for people in the community,” said Ash), and Weller Books ("It was a very cool experience to shop at an independent bookstore that has been open since 1929, as it was amazing to see the collection of new, used, and rare books they carried,” said Tyson.  “As soon as you walked in the store, you could begin to see the long history of the bookstore and the impact that it has had on Trolley Square and Salt Lake City.").

The Little Free Library, a bookshelf that’s sometimes more full of books and sometimes less so, resides in the student lounge in the College of Social Work.  For both Tyson and Ash, walking past the bookshelf helps them feel more connected to their fellow students and surrounding community.  “Reading diverse books helps build community and unity by increasing our understanding of others and their lived experiences,” said Tyson.  “Books offer us a different perspective on things.”  Ash agreed.  “It's important to read diverse books in order to broaden your horizons and ‘decolonize your mind’—as the motto of our Little Free Library says.”  She continued, “This library and these books are meant not only to challenge but to support.  We hope these books help some folx feel not quite so alone in the experiences they’re going through.”