Summer is the season of blockbuster hits, when superheroes and origin stories light up the big screen.  No matter how bad the villain might be, no matter how quirky the hero might seem, there’s a reason behind it; some thread that goes back to the beginning and explains the situation as it stands today.  The backstories bring substance to already iconic characters.

This isn’t just true for superheroes.  In reality, each person has an origin story—a turning point, or series of events and circumstances, that led them to the place they are today.

For Eric Garland, Distinguished Endowed Chair in Research and director of the Center on Mindfulness and Integrative Health Intervention Development (C-MIIND), one of the first key turning points happened the first week of his doctoral program at the University of North Carolina (UNC) at Chapel Hill.  He had chosen the doctoral program there for a variety of reasons, but chief among them was that he wanted to go to a renowned social work program where he could research hypnosis in a rigorous way.  He had previously seen a lot of success using clinical hypnosis to treat clients suffering from pain, stress-related conditions, and addictive behaviors, and he wanted to understand that more fully.  At the time, UNC Chapel Hill had a professor in the medical school who was conducting clinical trials on hypnosis as a treatment for irritable bowel syndrome.  And he had agreed to work with then-PhD student Eric Garland. 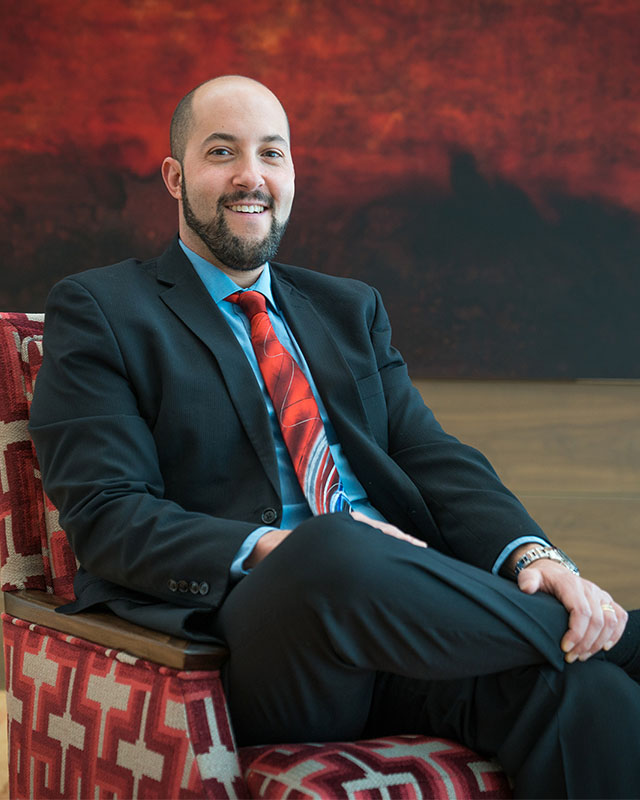 As Dr. Garland and his family were settling in to their new home, the professor called Dr. Garland to explain that he couldn’t work with him after all.  His funding had run out and he didn’t have the money or time to take on a PhD student.  It was as if the skies suddenly darkened and everything went gray for Dr. Garland.  This was what he’d been working toward for years.  And now it was gone.  After a very long night, Dr. Garland received another call from the professor—this time with an idea: “Are you interested in studying mindfulness?  My colleague, Susan Gaylord at the university, has a grant to research mindfulness as a treatment for irritable bowel syndrome.  Does that interest you?”

Dr. Garland was floored.  “People do research on mindfulness!?”  Though mindfulness-based therapy was still not widely known at this time, he had both professional and personal experience that demonstrated how powerful mindfulness could be.  “Part of why I wanted to do my doctoral research on hypnosis was because clinical hypnosis was the closest thing I’d found to mindfulness that was being utilized in the healthcare system,” he recalls.  “Up to this point, I didn’t know mindfulness was something I could do rigorous research on.”  From there, everything changed.  He dove headfirst into mindfulness research.

When the time came to decide a dissertation project, serendipity intervened again.  Dr. Garland was told he was required to study a social problem for his dissertation.  When he explained that he was more interested in studying solutions (i.e., mindfulness) than in studying any particular problem, he was told this requirement wasn’t up for discussion.  At about the same time, a new social work professor came to UNC Chapel Hill: Matthew Howard, an internationally recognized expert in addiction with an interest in integrative health.  Dr. Garland approached Dr. Howard and asked him if he would support him in studying mindfulness as a treatment for addiction.  Although Dr. Garland didn’t know much about substance misuse, this match seemed like it might be a good fit.

It turned out to be nearly perfect.  “The study of addiction,” he said, “is really the study of how some of the most fundamental processes of human consciousness can go awry—processes I had already been exploring for years through mindfulness.”  At the time, the most common method of treating substance use disorders was the 12 step program.  One of the key steps in that process, step 11, is to seek connection to a higher power through mindfulness.  The 12 steps specifically mention mindfulness, but they didn’t teach people how to actually do it.  It was almost as if this research space had been carved out precisely for him.

From there, circumstances continued to come together for Dr. Garland.  As a new professor at Florida State University, he wasn’t quite sure what his research agenda should be.  A colleague suggested that with his background in addiction, pain, integrative health, and mindfulness, he was uniquely positioned to address escalating concerns about opioid misuse.  It all clicked.  All his previous experience came together at the right moment, at the right place, to study one of the most pressing public health crises of our time.

And that’s what he continues to do almost a decade later.  It looks different than it did when he started—he’s now an internationally known researcher with a published treatment manual and more than $40 million in federal grants, specifically allocated to research mindfulness as a treatment for opioid misuse—but his perspective is largely the same.  “My fundamental objective hasn’t changed,” said Dr. Garland.  “My goal is to alleviate human suffering and promote flourishing.”

When talking about the journey that brought him to today, Dr. Garland is quick to point out the importance of remaining open.  “I didn’t find my passion,” he says, “It found me.  It’s important in life to be open to where the path will take you.  To be curious.  Life doesn’t happen all at once.  It’s a mystery that’s giving you clues along the way.”